capitalization of proper nouns, including abbreviations, initials, acronyms, and organizations; 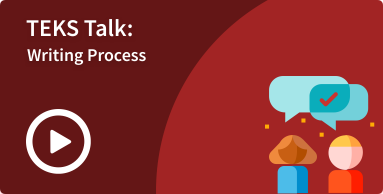 Task students with underlining proper nouns in their writing including abbreviations, initials, acronyms, and organization names each in a different color. Task students to work with a partner and edit their writing to ensure all proper nouns are capitalized correctly. Monitor students’ knowledge by asking them why a specific term should be capitalized and make corrections as needed. For instance, students may erroneously believe that the days of the week and the months of the year should be capitalized in Spanish.

This assessment requires students to apply their knowledge of capitalization of abbreviations, initials, acronyms, and organization names. Students should be able to apply correct capitalization by editing drafts, evaluating the correct use of capitalization and making necessary changes to improve the quality of the writing. This skill should be developed with writing in all genres.

a type of abbreviation formed from the first letter of multiple words that does not require periods after each letter and is pronounced as a new word phonetically or by its individual letters (called initialisms)
Unlike a common noun that names general items (e.g., friends, states, buildings), proper nouns name specific people, places, or things/events, and always begin with a capital letter (e.g., Austin, Texas, Torre Eiffel, Cuatro de julio). Students should be especially mindful of correct capitalization when using a proper noun presented as an abbreviation, initialism, acronym, or the name of an organization. Students should understand that if they do not correctly capitalize these types of proper nouns, readers may not understand that a word is meant to refer to something specific and is not merely a misspelling or misuse of some other intended word or slang.
During the editing stage of the writing process, students further improve their draft and often prepare it for publishing by correcting convention errors. Ensuring that the standard rules of the Spanish language have been applied correctly helps the audience to more easily comprehend the information because they are not having to interrupt their thinking to determine what the writer intended to say.
standard rules of the Spanish language, including written mechanics such as punctuation, capitalization, spelling, paragraphing, etc. and written/oral grammar such as parts of speech, word order, subject-verb agreement, and sentence structure
Supporting Information for SLA.6.11.D.vii
Feedback