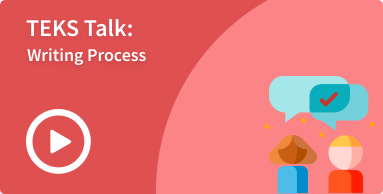 Use the following rubric to monitor students’ progress toward mastering this SE. This SE should be assessed both while students are developing drafts and after students have completed their drafts.

an independent clause that begins with a capital letter, contains at least a verb (such as in a command), and ends with a punctuation mark (period, question mark, or exclamation point)
Editing is a stage in the writing process when a written text is prepared for an audience by attending to and correcting mechanics, grammar, and spelling. Applying the standards of the English language correctly helps the audience more easily comprehend the information because it is not having to interrupt thinking to determine what the writer intended to say.
standard rules of the English language, including written mechanics such as punctuation, capitalization, spelling, paragraphing, etc. and written/oral grammar such as parts of speech, word order, subject-verb agreement, and sentence structure
Subject-verb agreement is the grammatical state of a sentence when the subject and verb match in number (singular or plural) and/or person (first person I, we; second person you; third person he, she, they). For example, if the word they is used in a sentence, the verb are should be used rather than is.
Supporting Information for ELA.2.11.D.i